Memorial Candle Tribute From
Beach Funeral Homes - East
"We are honored to provide this Book of Memories to the family."
View full message >>>
Memorial Candle Tribute From
Ric
"Dad, I am so grateful that you were my Dad, and I will always cherish the memori"
View full message >>>
In Memory of
Thomas Patrick
Johnston Jr.
1934 - 2017
Menu
Send Flowers 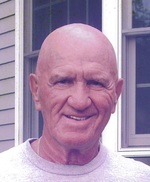 He served in the US Navy and was honorably discharged in December 1959. He worked for the United States Postal service retiring in 1989.

He is survived by his children, Tara Taryn, Lynn Jackson, Leigh Truett and husband Kevin, Eric Johnston and wife Kim as well as 8 grandchildren: Candice Guglielmo, Holly Vanikiotis, Ashlee Truett, Amy Donofrio, Jaclynn Truett, Amber Jackson, Andrew Truett, and Eric Johnston, as well as 9 great grandchildren. He is also survived by his sisters, Frances D'Addio and Joan Aufiero and predeceased by his sisters Rita King, Flora Johnston and Sandra Johnston. He is also survived by an extended family of nieces and nephews.

The family has arranged for final services in New York.