We're sorry but the candle you have selected is currenty in the process of being purchased or has just recently been purchased.

Please feel free to select another candle or check back in 15 minutes to see if the candle you have selected has been released for purchase.

We're sorry but there are no candles available for lighting.

You have already begun a candle purchase session. If you would like to continue with your current candle choice please click "Continue" otherwise please click "Select Another".

In Memory of
Charles  Franklin
Harris
1919 - 2017
Click above to light a memorial candle.

The lighting of a Memorial Candle not only provides a gesture of sympathy and support to the immediate family during their time of need but also provides the gift of extending the Book of Memories for future generations. 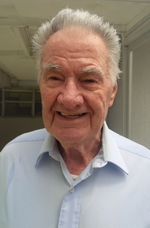 Charles will be missed by his daughter, Jill Harris, and son-in-law Thomas Koet of Melbourne, FL; his grandson Trey Harris and wife Crista; and his great-grandsons Conner and Collin Harris of Orlando, FL. Charles was preceded in death by his wife, Ruth Harris, and his son Charles F. Harris Jr.

Charles grew up in Cooleemee, NC with 10 siblings.

Charles was a loving husband, father, and grandfather who took joy and pride in his family and friends. Having lived a long and full life, he will be remembered for his generosity and lively sense of humor.

Memorial donations may be made to Hospice of St. Frances of Brevard or the Alzheimer’s Association at alz.org.

To send flowers to the family of Charles Franklin Harris, please visit our Heartfelt Sympathies Store.

This Book of Memories brings those affected by loss together by encouraging communication and self-expression. By giving friends and family a special place to tell their stories and express their feelings of loss, it helps them care for one another during a very difficult time. Click on any of the links to the right to access features or information within this memorial website.