In Memory of
Herbert Edward
Jowers
1932 - 2018
Click above to light a memorial candle.
Memorial Candle Tribute From
Beach Funeral Homes - East
"We are honored to provide this Book of Memories to the family."
View full message >>>
Send Flowers
Menu 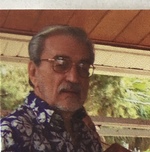 He was a native Floridian, born in New Smyrna Beach on July 13, 1932 to Alice and Raymond Jowers. He attended Ringling School of Art in Sarasota and worked as a commercial artist his entire career. He was a veteran of the Korean War.

Herbert was an avid lover of nature and enjoyed painting wildlife during his retirement. He lived a peaceful life, enjoyed his family and was a gentle soul.

Mr. Jowers is predeceased by his wife Jeannette Tremble, a son Herbert Jr. and daughter Sharon (Fred) Dunham. He is survived by his former wife Carole Jowers, son Gary (Joy) Jowers, Jay (Tina) Jowers and daughter Denise (David) Diana. Herbert is also survived by his brother James Jowers; sister Sherrill (Burt) Sellers and many beloved brothers and sister-in-laws. Herbert also had step-children, grandchildren and great grandchildren as well...He will be sorely missed by all who loved him.

Memorial services will be held at South Patrick Baptist Church in Satellite Beach on Tuesday, March 27 at 10:00 am.

In lieu of flowers, memorials may be made in Herbert's name to
Hospice of St. Francis
1250 Grumman Place
Suite B
Titusville, Florida

To send flowers to the family of Herbert Edward Jowers, please visit our Heartfelt Sympathies Store.