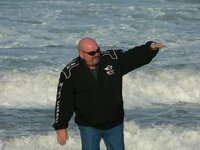 John Nowak, 73, of Melbourne, Florida passed away peacefully at his home on Sunday, December 26, 2021 surrounded by his family.

John was born in Delmenhorst, Germany on March 25, 1948 to Bruno and Johannes (Kramer) Nowak. He served his country honorably in the United States Air Force enlisting in 1967, and retiring as a Master SGT in April of 1988 after serving for 21 years; touring in Germany and other parts of the world for 10 years and serving in the Vietnam War.

John was a member of the Nassau County Auxiliary Police Department Unit 129 and retired after 9 years as Captain. Of all the things he loved, among his favorites were classic cars, motorcycles and collecting guns.

He was well liked by whoever he met and will be greatly missed by family and friends.