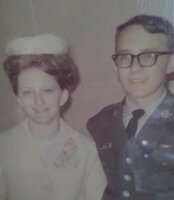 Judy Mills of Satellite Beach passed away February 17, 2022 due to complications of a severe medical reaction.

Judy, 75 years old, was born to Clarence and Cecilia Moran in Vincennes, Indiana.

She and Rob, her husband of 54 years settled in Satellite Beach in 1982.

Judy was a retail specialist, serving in many capacities at primarily AAFES in the US and Europe. She retired in 2013 after 30 years’ service. Judy doted on her grandchildren greatly and her loss will be forever heartfelt