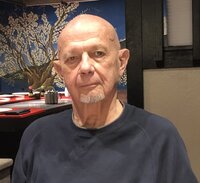 David Vogt Cragg was born on December 19, 1939, in Rochester, NY to Daniel and Mildred Cragg.  Daniel was the Principal of a school in a small town outside of Rochester and Mildred was a stay-at-home mom.   They had one other child, Dorie, who was nearly three when David was born.

Tragedy struck when David was about 13 years old, his father, Daniel, was killed by a drunk driver while changing a tire on the side of the road. At that time the school provided a home to the Principal on school grounds; once his father died, they had to vacate the home.   Mildred, who had never worked outside the home, had to move from the only home the children had known, to Rochester where she found a job as a secretary.

While only 13 David worked to help support the family in their new life in Rochester.  When it came time for David to attend high school, he was awarded a scholarship to the prestigious Mount Hermon boarding school in Massachusetts.  While there he excelled in soccer and supplemented his scholarship by working in the bakery and in the laundry where he learned to iron.  David did not retain any baking skills; but he was excellent at ironing clothes!

While David was at the boarding school Mildred married Claude Birch who became a loving stepfather to both David and Dorie.  Claude and Mildred bought a cottage on Canadaigua Lake in NY where the family enjoyed many weekends and summers until they sold it in the late 1980’s.   David enjoyed swimming in the lake, fishing, and water skiing on his vacations in NY.

When David graduated from Mount Hermon, he chose to enlist in the Army rather than go to college.  While in the Army he was stationed in Garmisch-Partenkirchen Germany as a finance officer.  As David tells it; he was in charge of the protecting the money and the USO girls in the event of an attack. (It was the early 1960’s and there was a “cold war”; and the tensions were high between the United States and the Soviet Union.)  What a great assignment for a kid fresh out of high school!  He was invited to go to Officer’s Training School but declined the honor.  He loved his time in the Army and told many stories of his antics and interactions with the locals.

While David was in Germany Claude and Mildred bought a condo in Belleair Bluffs, Fl so upon his discharge from the Army in July 1964 he travelled to Florida in his new VW Beetle he had shipped from Germany courtesy of the Army.   Since his parents were residents of Florida David was considered a resident so he was accepted to the University of Florida.  His first-year tuition was $75 which included football, and other sporting event tickets!  He studied accounting and became a CPA.

His first job out of college was with one of the premier accounting firms, Haskins & Sells.   Around this time, he married Gail Van Atta and lived in Coral Gables Florida.  A couple years later, in 1970, along came Steven Daniel Cragg.  A beautiful little boy to add to David and Gail’s family.  David was not happy being a CPA and decided to strike out on his own and moved the family to Colorado where he ventured into the mobile home business.   Laura Louise Cragg entered the Cragg family in 1974 and brought much joy to the young couple.

Eventually David and family moved back to Florida when David accepted a job with Major Realty in Orlando as their CFO.  While he enjoyed the perks working for Major provided his entrepreneurial spirit kept calling.   After he left Major, he became an independent developer first in Orlando and in the mid 1980’s in Brevard County.

David and Gail divorced around 1978.  In 1983 mutual friends, Claude & Adair Steppe introduced David to Anita through a blind date at Poor Richards (now Djon’s) in Melbourne Beach.  It was a magical evening and ultimately lead to a simple backyard wedding at the home they bought in Maitland in July 1984.

When David and Anita married, they became a blended family of five:  Steven & Laura from David’s first marriage and Joshua Charles Baker from Anita’s previous marriage to Frank Baker.  Gail also lived in Maitland, so Steven and Laura were frequently at David and Anita’s house in Maitland where Josh lived full time.  When they married David was working on developing Indian Harbor Beach Club in Indian Harbor Beach FL and Anita was working on her master’s in psychology.

In 1985 David asked Anita to assist in the management of Indian Harbor Beach Club.  In August 1986 David, Anita, Josh, and Ralph the cat, moved from Maitland to a townhouse in Melbourne Beach.  David was in the middle of developing the Radisson Hotel in Indialantic.  Once construction was well underway David asked Anita to help out again and she started working for the development company as the construction coordinator.  This cemented a work partnership that last until 2008.  For over 22 years David and Anita worked as a team developing and managing their communities in Brevard County.

David was the visionary, the deal maker, the guy who saw things that others didn’t.  Anita was the detail person and later became a licensed home builder to build the homes in the communities they developed.   Land development is not for the feint of heart.  There are so many obstacles and so many things beyond your control; but David was tenacious and creative.  When one door slammed shut; he found another door.

Their developments in Brevard County include:

David was a bit of an “absent-minded professor” type and accident prone…or he just didn’t pay attention as closely to the possible outcomes as others might.    Anita and the kids used to joke that whenever David got around fire or power tools…and later guns…keep fingers ready to dial 911.  He was terrible at telling jokes but made people laugh because he messed them up so much and they were always corny.  He knew the first five words to a lot of songs; but not one entire song.  He made up silly rhymes and limericks.  Whenever he found a good parking place it was because his parking angel “Morris” saved it for him.    His friends and family can add their own stories about David’s quirkiness.

David greatly loved his family, his friends, his cats, landscaping and plants, refinishing wood, restoring antiques, reading, golfing (although he wasn’t very good at it, he loved being on the golf course with the guys), when he went fishing there were burgers for dinner, always very proud of every development he was involved in, and when he “retired” he started a new life in the firearms business and particularly loved researching the history of older, collectible guns.

David touched the lives of many and during his last weeks of life he was visited by so many and enjoyed reminiscing.  He will be greatly missed by his family and friends.  Survived by his loving wife of 38 years, Anita.  His son Steven and Kimberly (Daughter in Law) Cragg, their three wonderful children:  Katy Beth, Kirsten, and Sam.  Daughter Laura Cragg, Joshua Baker (son), and his sister Dorie.