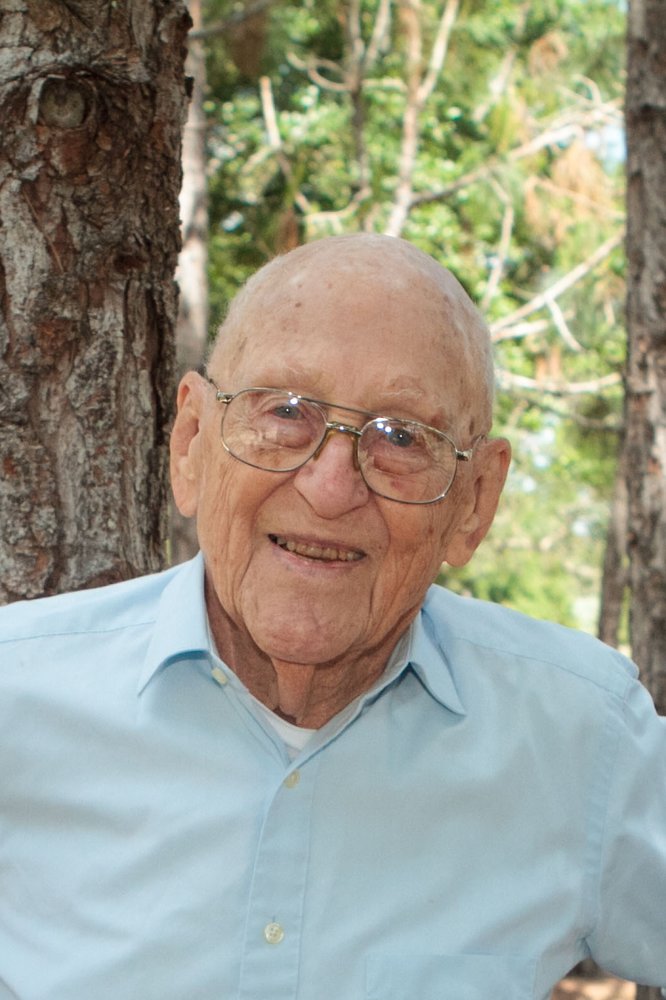 He grew up in New Orleans where he attended elementary School at McDonough #9 School and graduated from Warren Easton Boys High School in February 1937.  After graduation he worked for a while for a carpenter and cabinet maker until he had an opportunity to work for a dental laboratory (Paramount Labs, Inc.) as a delivery boy.  There he worked his way up as an apprentice then as a technician.

Most of his social life at this period was centered around his church – St Luke’s Lutheran Church.  The youth group was quite active.  One of the girls in the group brought a friend to one of the activities.  It was this friend, Marguerite Wollfarth, who caught his eye.  They began going out together in groups and later on double and then single dates.  Just before WWII started they were going steady.  Before he left for the Army in 1942, they were engaged.

He entered the Army on October 21, 1942 and was assigned to the Medical Department.  He went to Camp Barkley, Texas for basic training.  He was then assigned as a dental technician to the 128th Station Hospital at Camp Beale, California, along with 21 other men.  Camp Beale was a newly constructed camp and there was a lot of mud everywhere. Muddy boots were a big problem when returning to the barracks, which had to be clean at all times. They had military type training in the mornings and each department, medical, surgical, dental, x-ray, and etc .had technical classes in the afternoons. The hospital unit then moved to Camp Cooke (now Vandenberg AFB) for advanced training.  The unit then left the U.S. from Oakland, CA on January 29, 1944, destination Lea, New Guinea.  Approximately 22 days later they arrived and took over the 5th Field Hospital’s area along with their patients and they were moved farther north. Within 24 hours we were a fully operating hospital with about 500 patients. The unit was meant to be a 250-bed Mobile Hospital, but never had fewer than 500 patients at any time until they left New Guinea.  In June, 1945 the unit was ordered to pack up and board the USS Lavaca, an APA, bound for the Philippines. . It turned out that they were scheduled for the invasion of Japan. They were to go ashore in the second wave of the landing and set up a hospital on the beachhead to receive casualties.  Instead, the unit went ashore in Tokyo Bay and took over the Japanese hospital serving their military academy.  After finally having enough “points” he was shipped home and discharged on January 11, 1946.

Louis and Marguerite were married on February 23, 1946 and later that year bought their first home with a G.I. loan.  He went back to work at the Paramount Labs as a dental technician.  Soon after that he had an opportunity to take a position at the New Orleans Veterans Administration and in 1955 transferred to a position with the Army Transportation Dept as the dental technician at Camp Leroy Johnson.  He remained there until the camp was closed in April of 1964.  He then rented space in a small building not too far from home and opened “Seiler Dental Lab” on April 15, 1964.  He continued this until 1984, when he retired a few months before his 65th birthday.  In 1970, Louis and Marguerite sold their home in New Orleans and moved to Slidell, Louisiana, which was just northeast of New Orleans on the north shore of Lake Pontchartain.  In 1991, Louis and Marguerite decided to move closer to family, which meant either Dallas, Texas or Melbourne, Florida.  They chose Florida over Texas because of the milder weather. Marguerite passed away in 2008 and Lou remained living independently until his passing.

Louis enjoyed woodworking, fishing, gardening, jewelry making and gem cutting to occupy his retirement.  On October 31, 2011, Louis was honored to be on an Honor Flight to Washington, D.C. to visit the memorials dedicated to the veterans of WWII, Korea and Vietnam, and for the past 9 years has been a regular attendee at the monthly lunches hosted by Space Coast Honor Flight.

In a short history of his life, Louis concluded with the following;

“As I come to the last years of my life on this earth, and look back on my life, I realize that I was truly blessed. I would like to be remembered as one who loved his family, and I look forward to being reunited with all my loved ones in the hereafter with my Lord in His everlasting Kingdom. May God continue to bless us all.”

A Celebration of Life will be held after larger group meetings are once again allowed.  Please check this web-site again for a scheduled date.  Interment will be at Florida National Cemetery in Bushnell, Florida, where Louis will once again be with his wife.

In lieu of flowers, donations may be made in his memory to Space Coast Honor Flight (www.spacecoasthonorflight.org), or to The William Childs Hospice Facility of Health First Hospice.

To send flowers to the family or plant a tree in memory of Louis Seiler, please visit Tribute Store

Share Your Memory of
Louis
Upload Your Memory View All Memories
Be the first to upload a memory!
Share A Memory
Send Flowers