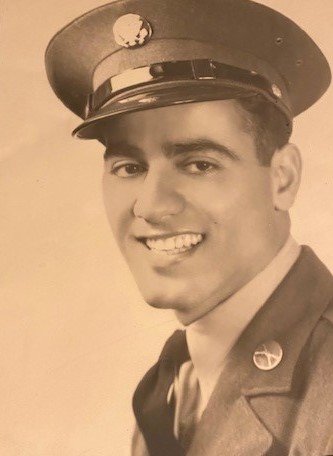 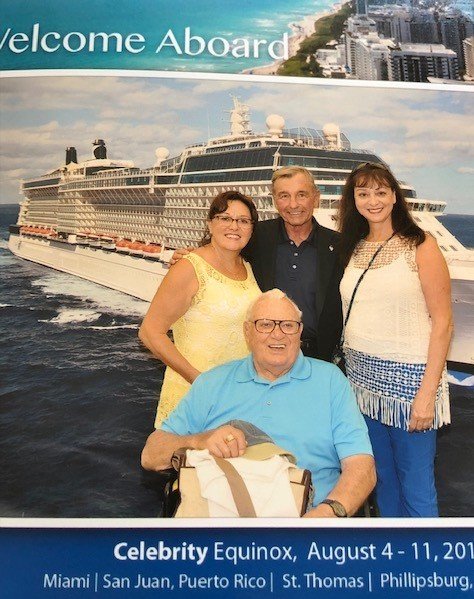 Loving Husband to Claudia DeNicolo who passed in 2008 after 62 years of marriage. They would tell you their greatest accomplishment was their 6 children Sandra (Pau) Gammel, Meri (Ron) Lauterbach, Claudia (Glenn) Lackey, Laura Grimaldi, Louanne (Alan) Brown) and Jon Grimaldi

Santo was born in Arma, Kansas to Giuseppe (Joe) and Filomena (Minnie) Grimaldi; number 5 of 7 children. At 18 he moved to Melrose Park, IL to escape the prospect of working in the coal mines in Kansas.  He joined the Army in 1941 and was stationed at Ft. Ord where he worked the California Coastline putting up radar stations every 75 miles all the way to the Mexican border.  When WWII broke out he was moved to Ft. Henderson in Tampa FL where he got his radio training and was then sent to Trinidad for the duration of the war.

When he returned to Melrose Park, he worked as the manager of the theater in town and this is where he met his bride.  Claudia always said she chased him til HE caught her.  They were married in a double wedding ceremony with Sandy’s brother Tony and his bride Shirley on Sept 1, 1946.

After a couple years of marriage Sandy and Claudia took over the family grocery store from her father in West Melrose.  They worked the store during the day and Sandy went to work on the railroad overnight running freight to Indiana and back.  He began his railroad career as a fireman, shoveling coal into the engine and ended it as an engineer.  In 1958 his second back surgery in as many years, necessitated a career change.  At the age of 40 he went to school to learn a new invention called the computer.  The top 10 in his class were guaranteed a job and Sandy  was one of them.  He was hired by Spector Freight Company as their data processing coordinator.  He ran  payroll for the nationwide company.  Most of his life he worked two sometimes three jobs at a time to keep his family in food and clothing. He was a dedicated father and a loving husband.  You could set your watch by his arrival home every evening.  He would round the corner of 18th and Main at precisely 5:45pm as he got off the Northwestern train that took him back and forth to his job in Chicago.

Not the kind of man to go out with his buddies to a bar or out with friends, his family was his greatest treasure.  He loved when everyone was together, be it friends of the kids, or  nieces, nephews brother and sisters. Til the week before he passed he enjoyed having folks over for dinner and visiting over a glass of wine.  He was an amazing cook and great host. He always had a welcoming smile.

Once Sandy retired he and Claudia moved to Melbourne Beach Florida where they took up golf,  went dancing, made many new friends and genuinely enjoyed their life.

To send flowers to the family or plant a tree in memory of Santo Grimaldi, please visit Tribute Store

Share Your Memory of
Santo
Upload Your Memory View All Memories
Be the first to upload a memory!
Share A Memory
Send Flowers