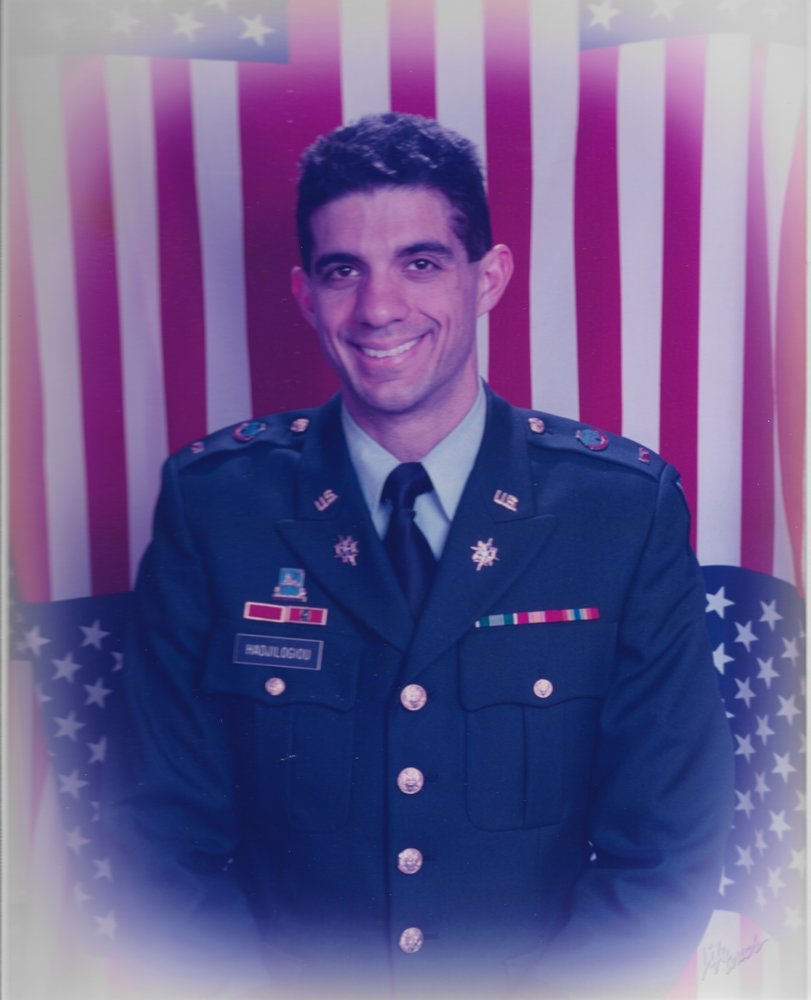 The sudden death by accident of Alexander Hadjilogiou, tore through the hearts of all his family and friends on August 30, 2020 at the age of 44.

Alex was a man of the highest caliber. He loved God and his Greek Orthodox faith, his family & friends.  He was loved, respected and admired by all of the people whose lives he touched! He was a leader throughout his whole life.

Along with his brother, Steve, and his parents, he grew up around the St. Katherine Greek Orthodox Church in Melbourne and lived in Indian Harbour Beach, Florida. He attended Ocean Breeze Elementary School, Hoover Jr. High and was a highly decorated graduate of Satellite High School.

At Satellite High, Alex excelled academically, physically & socially.  He served his classmates and was elected President of his class Sophomore & Junior year and Student Government President in his Senior year!  His passion was to create activities and awards for his classmates.  He was blessed with many talents.  He was selected by the school to participate in Boys State, Hugh O’Brian Leadership Program, Presidential Classroom in Washington, DC.

His classmates elected him President of the Student Music Association.  He continued to excel by participating in the Ten Tones, State awards for his piano and singing talent!  He was inducted into the National Honor Society and graduated with honors – with a touching speech at the graduation themed; “This is the Time.”

At the University of Florida, he received a rare 4.1 grade point average in his Freshman year and thus was selected by the University to continue his leadership skills by giving tours of the campus, coordinate student housing projects while also participating in musical & theater programs.  He was a true scholar with a thirst for knowledge.

He was honored to be inducted into the Florida Blue Key Honor Society.  Florida Blue Key is the oldest & most prestigious leadership honorary in the State of Florida. Founded in 1923, from the best & brightest leaders at UF – Florida’s preeminent university – to host Dad’s Day, Florida Blue Key focuses on leadership and public service to the University of Florida and the Sunshine State through its active chapter and alumni societies throughout Florida. He graduated with a B.S. degree in Public Relations.

Upon college graduation, he worked with Delta Airlines, but decided quickly that he wanted more leadership skills and volunteered to join the Army.  After Basic Training, he graduated with honors from the Officers Candidate School and Army Intelligence.

He was assigned to the Tenth Military Intelligence Battalion at Fort Bliss in El Paso, Texas.  Alex was awarded the “Army Commendation Medal” for meritorious service, leadership & dedication as the HSC Executive Officer and Delta Company ARI Platoon Leader in the 204th MIBN (AR) in support of counter-narcotic and counter-terrorism operations.

After 4 years of service and the offer to move up in rank as a Captain, he decided to leave the Army in 2004, feeling he had accomplished his goal of gaining leadership skills.  He credits the US Army for enriching & influencing his life.

University of Florida Law School was his next endeavor. As a leader, he served his fellow law students and UF student body as their Chancellor.  In two and a half years, he graduated with a Juris Doctorate degree.

While studying law, he applied & was accepted at the Yale University Divinity School in New Haven , Connecticut – an accomplishment he was very proud of.

He was so consumed with his career that he postponed getting married & forming his own family.

In the midst of this marvelously accomplished life, he maintained his love of music – learning to play a Greek instrument called Bouzouke.  His teacher called him a “talented phenomenon”!  Not only did he play like a professional, but he also sang in Greek while playing.  Then he would enter the dance floor doing his spirited Zebekeko!! – to the admiration of all who watched!

Alex packed so many more accomplishments in his 44 years than people do in a lifetime.  Because of his love and connection with his family, he decided to return to his beloved home. With his law background, he became advisor & took leadership in promoting the family-owned real estate business & building it.

Alex will be remembered for his intelligence, patience, compassion, tenderness and respect for others.  He was a proud “Theo Alex” (Uncle Alex in Greek) to his wonderful nephews, John & Christian, sons of his best friend & brother, Steve Hadjilogiou.

Such fond memories and strong bonding took place this past summer while Steve, his wife, Amy, and the family spent two months at the family compound; the home where they grew up together with their parents, Fran and Dr. John Hadjilogiou.  The family together enjoyed boating, fishing, and paddleboarding in our back yard.  Other fun games & backgammon tournaments were a part of our summer. His nephews adored him and he adored them back.

Today, we thank God, for giving us this special summer opportunity to play, sing, eat and pray together – that leaves us with wonderful memories.

Alex was a “Special” human being – “One of a Kind” young man with a big heart who was concerned for the hearts of others – a person who spread love with a smile & kind gesture.

To carry on his legacy of giving to others, the Hadjilogiou Family has established the “Friends of Alexander Hadjilogiou Foundation.”  The information is at the bottom of this page. Metropolitain Alexios of Atlanta will be officiating at the Funeral Service at St. Katherine Greek Orthodox Church on Saturday, September 5, 2020 at 10 am.

Burial with military ceremony will be at Florida Memorial Gardens in the family plot next to his maternal grandparents, Steve & Georgia Metropoulos.

For safety reasons, his family asks that everyone follow COVID-19 guidelines such as social distancing & use of face masks.

Alexander Hadjilogiou has fallen asleep in the Lord on Sunday, August 30th.  He was 44.

Funeral service is scheduled for Saturday, September 5th at 10 am followed by a burial service at Florida Memorial Gardens.  Seating in Church due to COVID is limited to 60 people.  His Eminence Metropolitan Alexios will be officiating along with Fr. Demetri.

You may livestream it at

If you wish to participate at the burial at Florida Memorial Gardens, following Church service, there will be Military Funeral honors and will be outdoors, following the COVID guidelines.

At the request of the family, in lieu of flowers, please read below…

To honor Alexander’s legacy of caring, giving and serving others, the Hadjilogiou Family has established the Friends of Alexander Hadjilogiou Foundation.

In lieu of flowers, the Hadjilogiou family request that donations be made to the Friends of Alexander Hadjilogiou Foundation c/o The Miami Foundation. All donations are 100% tax-deductible.

For check donations, please make check payable to The Miami Foundation with Friends of Alexander Hadjilogiou Foundation in the memo line. You can mail your check to 40 NW3rd Street, Suite 305, Miami, FL 33128.

To send flowers to the family or plant a tree in memory of Alexander Hadjilogiou, please visit Tribute Store
Saturday
5
September

Share Your Memory of
Alexander
Upload Your Memory View All Memories
Be the first to upload a memory!
Share A Memory
Send Flowers