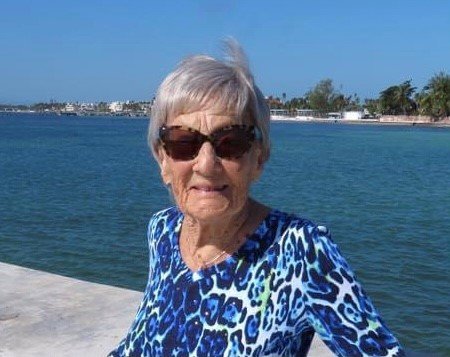 Josephine Lawrence passed away peacefully on December 29, 2020 in Tallahassee, Florida. She was 103 years old and survived two worldwide pandemics.

Josephine was born on December 17, 1917 in Minneapolis, Minnesota. She was the second of eight children born to Colonel Martin R. and Mary Reiber.  As an Army brat, Josephine moved often and experienced many different cultures and countries, including Panama and the Philippines. In 1935 she graduated from Balboa High School in Panama. Her upbringing spawned her love for travel.

In 1937, while working at Ft. Benning, Georgia, Josephine met Ernie Lawrence. They eloped the following year and were married for 62 years.  For the first 20 years of their marriage they lived in Georgia, Illinois and Ohio and had a son (Jerry) and daughter (Marilyn) born 17 years apart. In 1958 they finally settled down in Satellite Beach, Florida. Josephine lived there until 2014 when she moved to Tallahassee to live with her family.

Josephine graduated from a local business school in the 1960s. She and Ernie were both Pan Am contract employees for NASA. Josephine’s employment as an administrative assistant to the flight school at Patrick Air Force Base, where she supported the training program for pilots and astronauts, was the highlight of her working career.

Josephine was an avid reader, as well as a proficient seamstress, gardener, and cook. Her favorite hobby was square dancing; she and Ernie were members of the Harbor City Squares Club for about 25 years. Josephine was also proud to have volunteered for the Meals on Wheels program, where she and Ernie served for five years. She also loved to travel throughout the United States and Europe, and took her last trip in March, 2020 at the age of 102. Josephine was a devout Catholic and a member of the Holy Name of Jesus Catholic Church in Indialantic, Florida, for about fifty years. Her faith was a source of her strength, and an inspiration to others.

During the last six years of her life, Josephine was supported by these family members and friends so she could continue to live at home with her daughter and son-in-law: Scott and Candice Lawrence, Beth Reiber, Susan Ferguson, Joyous Parrish, Mary-Jackson Thomas, Rachel Dress and Maggie Breza. Josephine’s family is immensely appreciative of their unwavering love and support for her. Josephine spent the last six months of her life in a private home supported by Big Bend Hospice. Her family will be forever grateful for the loving and compassionate care given by her personal caregivers Valerie Harris, Kisha Bolden, Rachel McClure and Jamie McClure.

Josephine was preceded in death by her parents, her husband, her son Jerry Lawrence (Barbara) and five siblings. Left to cherish Josephine’s memory are her daughter Marilyn Lawrence (Larry Sartin), granddaughter Cindy Irving (Rick), grandson Scott Lawrence (Candice), five great grandchildren Kylie (Matt), Aaron, Joy, Glory and Elijah, and two brothers Fritz Reiber (Joan) and James Reiber (Mona). Josephine had numerous nieces, nephews and step-grandchildren, as well as many friends. She will be lovingly remembered and missed by all.

A “Celebration of Life” event will be held at a later date, when Josephine’s grandson returns to the United States from South Korea. Contributions in Josephine Lawrence’s name may be made by check to Big Bend Hospice Foundation, 1723 Mahan Center Blvd., Tallahassee, FL 32308, or online at bigbendhospice.charityproud.org

To send flowers to the family or plant a tree in memory of Josephine Lawrence, please visit Tribute Store
Wednesday
6
January

Share Your Memory of
Josephine
Upload Your Memory View All Memories
Be the first to upload a memory!
Share A Memory
Send Flowers