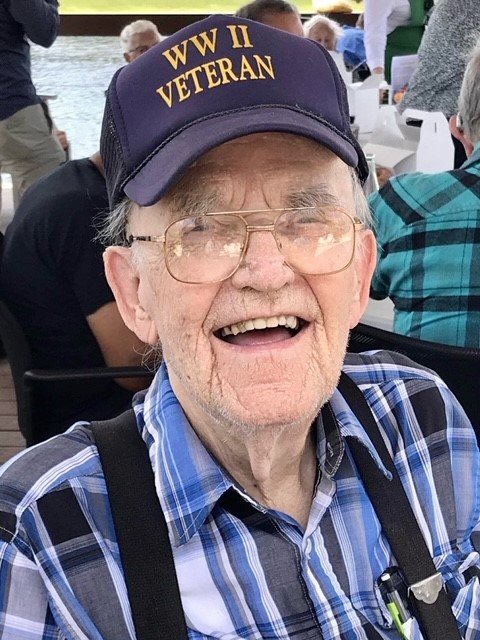 In Memory of James H. Whitney

James had grappled with an extended illness after suffering a fall in September of last year.  After living a long and exemplary life, he finally succumbed to a weakened heart and body.  James leaves behind a legacy of a life well-lived to his children, grandchildren, and great-grandchildren.  A child of the Great Depression and proud veteran of World War II, he epitomized the service, sacrifice and contributions made for this country by the Greatest Generation. He was a model of kindheartedness, and people regularly commented on his friendly smile.  James was also known to family and friends for being an honest and hardworking man, who steadfastly supported his family in whatever they endeavored to accomplish.  He was a gentle soul, a loving husband, a supportive father, and a kindhearted and devoted grandparent.  He loved to discuss history, politics, government, and what things were like in the old days on the farm.  He always saw himself as a simple country boy, despite his years traveling the world in the Navy and Air Force.

Anyone who met James was impacted by his kind smile and giving spirit.  He will be greatly missed and fondly remembered by all who knew him.  His family finds comfort in knowing that he was also a faithful servant of God, and we rest assured in the knowledge that we will join him one day in eternal peace and happiness.  A memorial for friends and family with military honors will be held at Cape Canaveral Military Cemetery on June 14, 2021.

To send flowers to the family or plant a tree in memory of James Whitney, please visit Tribute Store
Sunday
13
June