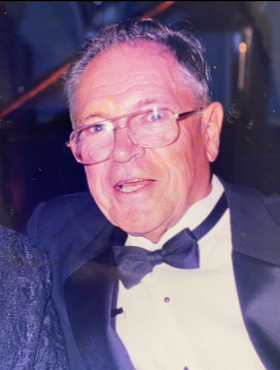 Frederick was born in New York, New York on April 10, 1927 to Frederick and Elsie (Borst) Mueller.

Frederick is survived by his loving wife of 21 years, Maria Adele Mueller.   They together enjoyed serving in their church and traveling.

He is also survived by his sister, Carolyn Leonard (husband Larry) and numerous nieces and nephews.  He was pre-deceased by his brother Bill, his sister Betty and his parents.

Frederick was an active member of Holy Name of Jesus Catholic Church.  He faithfully served as a member of the Bereavement ministry, as a perpetual adoration adorer, Eucharistic minister, and Sacristan.

The family requests that in lieu of flowers, donations be made in Frederick's name to the school endowment fund at the Holy Name of Jesus Catholic Church. Click Here to Donate