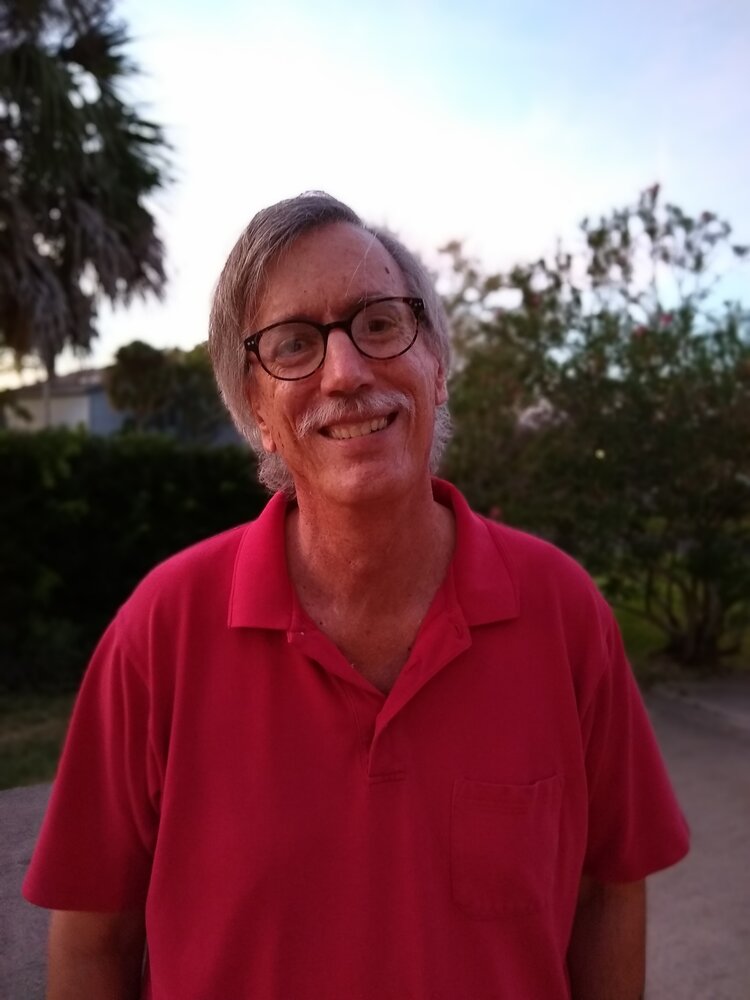 On Sunday, January 9, 2022, Daniel Gerlach, loving husband and father of two, passed away at the age of 65 from cancer. Dan was born on July 28, 1956 in Preston, Iowa to Gene and Eleanor Gerlach.  On December 19, 1983, he married Marie, and soon after joined her in England where she was pursuing a Master’s degree. They returned to Florida in 1986, and after building their current home resided in Indian Harbour Beach for almost 33 years, where they raised their daughters Helen and Mary.

Dan received his aerospace engineering degree from Iowa State University in 1978, and pursued graduate studies there until 1980 when he accepted a job at Harris Corporation in Palm Bay, Florida. There he worked as an aerospace and software engineer, developing analysis and design tools for Harris’ deployable space antenna business, until early 1984. At that time he moved Cambridge, England, and spent the next three years living and working overseas. Upon completion of Marie’s degree in 1987, they returned to Florida and Harris Corporation.

In 1999 Dan left Harris to work for Heide Corp (later Engineering Intent), a small software/consulting company that produced the Intent software design automation tool. He enjoyed the challenge of learning different technologies with every job, and the occasional international trip. Not long after he became an independent consultant in 2004, Intent was acquired by Autodesk, and Dan was offered a job to continue his consulting role with them.

Dan recognized a need in the power substation industry to automate design tasks, and left Autodesk in 2011 to develop the Substation Designer tool. This captured business and design rules specific to the industry as an add-on to 3-D modeling software.  After several years growing the business, Dan and his partner sold Substation Designer to Autodesk, and Dan re-joined the company. When their substation business was sold in 2016, Dan once again went with it, to Spatial Business Systems, from which he retired in 2019.

While Dan had many notable achievements during his career, his proudest accomplishment was seeing his two daughters, Mary and Helen, grow into lovely women and become settled in careers of their own. It was a source of great comfort to him while on hospice that they were willing and able to come home and spend time with him.

In addition to spending time with his family, Dan enjoyed traveling, creating 3-D printed models, reading history books, and watching college football. He was also an important part of his professional community, where he will be remembered in part through the Dan Gerlach SDS Industry Consortium (SDSIC) Innovation Award, which recognizes those in the community that have made the most innovative contributions to the industry in a given year.

Dan was preceded in death by his father, Gene, and his sister, Diane. He is survived by his wife Marie, his two daughters, Helen and Mary, his mother Eleanor, siblings Mike, Monica, and Sue, and many cousins, nieces, and nephews.

Because of Covid, funeral services will be private. However we invite all friends and family to an Open House/Reception at Holy Apostles Episcopal Church (505 Grant Ave., Satellite Beach) between 1:00pm and 4:00 pm on Saturday, January 29th, 2022, to remember and celebrate his life. We respectfully request that you wear masks to protect people like Dan who might be at greater risk. In lieu of flowers, donations can be made to the organization Fight Colorectal Cancer (https://fightcolorectalcancer.org/ ) or to the Satellite Beach Public Library, where an endowment will be set up in Dan’s name (751 Jamaica Blvd, Satellite Beach FL 32937).