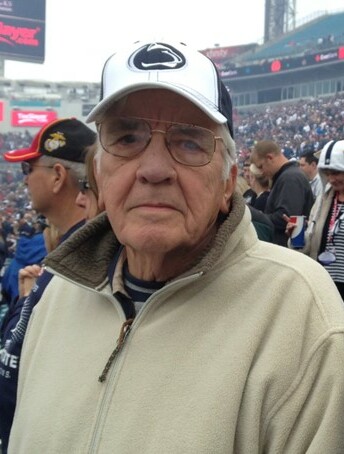 Marlyn Leonard Kurtz passed away peacefully after a brief illness at age 96 on January 17th in Melbourne Florida. He was born January 2, 1926, in Harrisburg Pennsylvania to Francis William and Esther Frances Kurtz. Marlyn spent his youth in Harrisburg, graduating from John Harris High School in 1943. He met his wife of 75 years, Constance (Grimshaw) Kurtz while delivering ice to the Grimshaw residence, with his father. Marlyn served in World War II after high school. Upon his return, he and Connie were married and Marlyn attended Pennsylvania State University on the GI Bill.

After graduation from college, Marlyn took a job with Harbison’s Dairy, which began a lifetime career in dairy and ice cream production, in executive positions with a number of well-known companies. He retired in 1992 as Executive Vice President with Howard Johnson’s.

After retirement, Marlyn and Connie settled in a house on the Indian River, where they lived for the last 28 years. Longtime Penn State boosters, they purchased a town house in State College in the 1990’s spending the fall and early winter months attending Penn State football and woman’s volleyball games.

Marlyn’s focus was always his family, and he is survived by his loving wife Connie, and two daughters, Kathy Brohawn, and Lisa Goff. His son, William Kurtz, an attorney in Baltimore MD, passed away in 2017. He provided great guidance to his grandchildren, Timothy Michael Brohawn, William Vincent Kurtz, Matthew Collin Brohawn, Brandon William Goff, and Delaney Marie Goff, who were a constant source of joy in his life. He delighted in spending time with his great-grandson, Hudson Michael Brohawn, who was born in the last year of his life.

An enthusiastic storyteller with many tales to tell, he was always quick with the joke. His smile will be missed.

A memorial service will be held at Cape Canaveral National Cemetery in Mims, Florida on February 18th at 11 am.