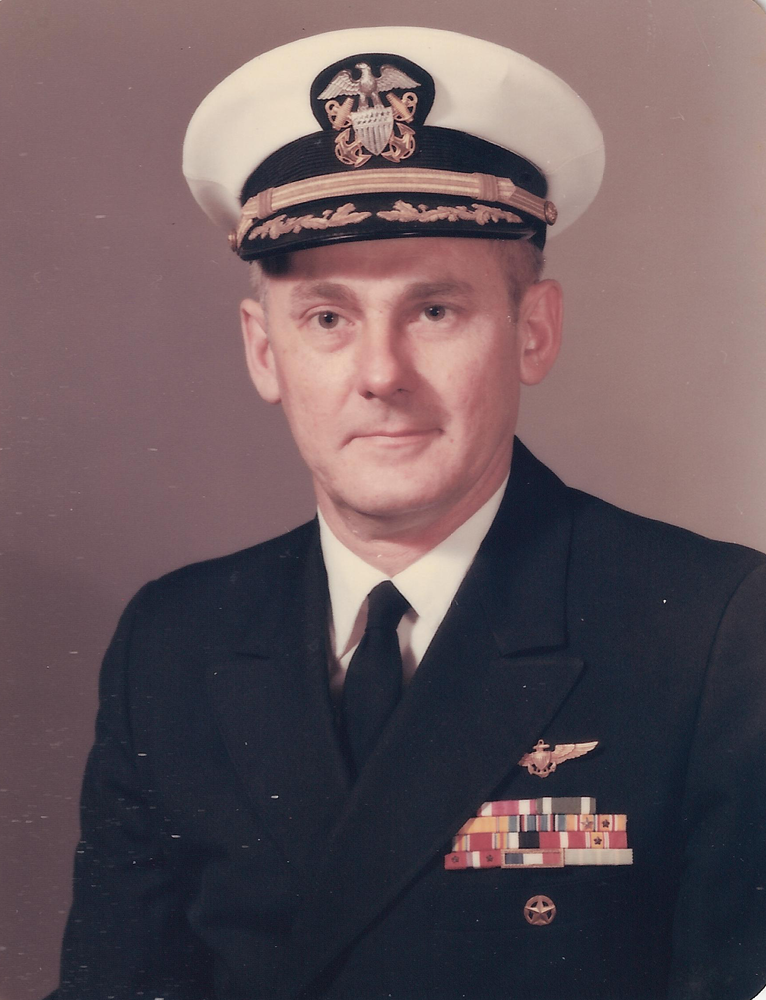 CAPT Warren Taylor, USN (Ret.), passed away October 18th, 2020 with his oldest son and daughter-in-law, as care givers, nearby. He was the second son of George Stammers Taylor, Junior, and Dorothy Anna Riedinger Taylor, and was born on 25 April, 1922, in South Orange, NJ. The family soon moved to nearby Maplewood and then to Drexel Hill, PA, a suburb of Philadelphia, where he attended nearby schools, enlisted as an Apprentice Seaman in April, 1940, then graduated from Upper Darby High School in that year. He entered the U.S. Naval Academy in mid-June of 1941 as a Midshipman in the accelerated Class of 1945, graduating with distinction (upper 1%) in June of 1944. Three days later he married his childhood sweetheart Audrey Jean Walbridge. They lived and traveled together for some 62 years, ending up in South Merritt Island in early February, 1983. His beloved passed away in June of 2006, having suffered from Alzheimer’s Disease for seven years. This document will be the short story of how a young man was fortunate enough to live a long life married to a wonderful woman, serve under and with a number of great officers and men in the world’s best Navy, and now pass the baton on to his family of dedicated American citizens.

Shortly after graduation and marriage, Warren reported to the USS South Dakota, BB57, also known and storied during WWII as “Old Nameless” and “Battleship X” by President Roosevelt in one of his speeches. SoDak was the Flagship of VADM W.A. “China” Lee, Commander, Battleships Pacific. The new Ensign was assigned successively to a number of Secondary and Main Battery billets, qualifying to stand top watches in these positions. In May of 1945 he was also qualified by Commanding Officer Charles B. Momsen (USS Squalus & Momsen Lung fame) to be an Officer-of-the-Deck underway and in port. (SoDak did not have more Senior Watch Officers underway or in port at this time.) He served in that capacity for the remainder of the war and was present at the surrender ceremonies in Tokyo Bay, having served as Officer-in-Charge of the honor guards for both Fleet Admirals Nimetz and Halsey when they came aboard for the surrender ceremonies. (The Pacific flag officers had designated SoDak to be the site of the surrender, but President Truman changed that to the Missouri, a battleship named for his home state, thus necessitating the flag changes noted above.) After several months serving in the occupation forces, the South Dakota returned to the continental US with Fleet Admiral Halsey flying his flag aboard her. She was probably the only ship that had participated in every major action in the Pacific and was the most-decorated battleship of World War II.

In early 1946 LTJG Taylor reported for flight training and received his wings the following year. He was assigned to a photo squadron following attendance at the Naval Photographic School in Pensacola. This tour soon took him to Central and South America for five months of hydrographic photowork. The following year he was Officer-in-Charge and Patrol Plane Commander (PPC) of the Navy’s first Photo Detachment based in Dhahran, Saudi Arabia. The success of this mission prompted a (highly redacted) Letter of Commendation from an Air Force unit which was another subordinate of Commander, Middle East Force. This was followed by several other similar letters from high commands of the Navy. Upon return to the States he attended the Navy’s Test Pilot School and then opted to serve in the Electronics Test Division of the Naval Air Test Center where he could qualify and fly in more different types of aircraft than in the other four Test Divisions.

After his 2½ year service at ET in Patuxent he made good on a promise to Jean to ask for a foreign tour where she could accompany him. Having studied French for a number of years and also having passed the written and oral exams for Translator and Interpreter qualifications, he expected to be assigned to a French-speaking country. However, his subsequent orders sent him to be the Transport Plane Commander (TPC) and Administrative officer of the Naval Mission to Colombia, based in Bogota, and flying frequently to Panama to settle Mission monetary accounts since he was also the Mission Disbursing Officer. So Jean and he started to study Spanish. During this period in South America he also flew RADM Milton Miles, Commandant, Fifteenth Naval District, and his party on a seven-day visit to the Colombian river naval bases. RADM Miles invited Jean to accompany the group, which included his wife Wilma and their son Charles, his Aide Jack Golenor (later John Gavin, movie star, and still later, our Ambassador to Mexico), and CAPT E. L. Robertson (Chief of the Colombian Mission) and his wife Martha. Upon leaving Colombia, LCDR Taylor was decorated by their Navy with the Orden del Almirante Padilla and also received a Letter of Commendation from Philip W. Bonsal, our American Ambassador to Colombia.

The next two years were spent in Monterey, CA, working on a Master’s Degree in Operations Analysis, followed by an assignment to the newly-created Airways Modernization Board which became the Bureau of Research and Development when the Federal Aviation Agency (now Administration) was created. Upon leaving, the FAA recommended that CDR Taylor be decorated by the Navy for his original and numerous published papers on Collision Probability, the Separation of Dual Runways, and his service as Officer-in-Charge of the month-long U.S. exhibit at Mexico’s Fiftieth Anniversary of Powered Flight held in their capitol. Thus, he also received the Navy Commendation Medal. For the following two years his assignment was mostly aboard the USS Wasp (CVS-18) in the sixteen-plane helicopter squadron HS-11 as XO and then as CO. Deployments were every other two weeks plus extended periods in the Mediterranean and EastLant. In 1962 he reported for duty as a student in the Senior/Warfare course at the Naval War College. Early summer 1963 saw him assigned as Executive Officer of the Command Department (Seamanship, Navigation, Leadership, Aviation, and Operations Analysis) at the Naval Academy. After several months he was asked by Dean Drought, USNA’s first civilian Dean, to become his first Assistant Dean for Faculty Affairs. During this tour he occupied the same quarters on the parade grounds that had been occupied by FADM Halsey many years before when he was a LCDR. As Assistant Dean, CAPT Taylor arranged to have the small computer organization at the Academy report directly to him and then arranged to introduce the first computer program to schedule Midshipmen to their classrooms and instructors. He also had duties as the Officer Representative for Navy’s Gym Team.

Mid-1966 sent him to the staff of the Commander-in-Chief, Pacific Fleet, located in Honolulu, in a billet where he was to create a new staff element as Fleet Director for Command and Control ADP matters on the staff as well as those of subordinate activities. The staff of the Chief of Naval Operations (CNO) in Washington soon asked for help in setting up a similar organization (Op-91) and this was followed by a similar group on the LANTFLT staff. One of the most successful systems created for the PACFLT staff during this period was an optical-character-recognition system to input dispatches into the very busy communications circuits. He was awarded the Meritorious Service Medal upon leaving the Staff.

In May of 1970 he became Commanding Officer of the Naval Command Systems Support Activity (NAVCOSSACT) located in a four-story, windowless building in the Navy Yard in Washington, DC. At that time, it was the government’s largest computer organization with over 1,000 military and civilian personnel assigned, large detachments in Norfolk and Honolulu, smaller units in the Pentagon, Iceland, London, and Belgium, and providing programs and operating computers for the CNO as well as programming major systems for all Fleet commands. During his three years at NAVCOSSACT he also supervised the automation of the Communications System Room of the White House. Awarded the Legion of Merit, Captain Taylor retired in May of 1973 after visiting or serving in 42 different countries and/or islands.

Following his military retirement, several years were spent as a Senior Analyst with a local company, after which he incorporated as a private consultant in computer technology and operations analysis. One of his contracts at this time was to plan for and conduct a three-day, tri-lingual conference on operations analysis for senior officers from each of the North and South American countries having navies who had been invited to the US by our Vice CNO.

CAPT Taylor accumulated over 5,240 flight hours in 33 distinct types of aircraft including Navy Epsilon, Navy Delta, and seaplanes – close to all that the Navy had in service at that time. He held a Special Instrument rating (green card) for nearly 20 years, was a Patrol Plane Commander, Transport Plane Commander, Helicopter-Aircraft Plane Commander, was qualified to carry and use Special Weapons aboard helicopters when properly authorized by higher authority, earned the Command-at-Sea insignia, and held Commercial Pilot’s License (Single and Multi-Engine Land) #846195. He had over 100 carrier landings and had no aircraft accidents.

Jean and Warren will be inured in the columbarium at the Naval Academy at a later date.

Share Your Memory of
Capt. Warren
Upload Your Memory View All Memories
Be the first to upload a memory!